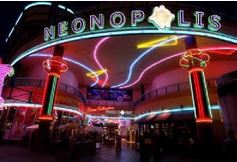 Gay Club Krave Massive is Closed in Downtown Las Vegas by state yanking liquor licenses for the Largest Gay Bar in the world. Reports were that Krave Massive owed more than 700,000 in state taxes. The Drink and Drag Lounge owned by Krave is also shut down. Drink and Drag is a drag queen bowling experience, a one of a kind gaming lounge.

According to KVVU-TV, the properties went out of business after the city yanked their liquor permits. Without liquor licenses there is no revenue stream for any of the businesses except the gift shop but No One will come to shop without the clubs being open.

Neonopolis retail shopping center is where Krave is located and occupies more than a 1/3 of the retail space will be hurt badly if the Gay Club does not reopen. It is likely that Neonopolis could have rented the space to much more reliable tenants but got greedy to be able to rent 1/3 all at once.

The Owner of the Gay Club said they will reopen but it is a tough financial hill to climb.