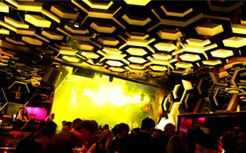 Moon nightclub at the Palms is often a celebrity hangout, anything at the Palms is a hotspot for People that want to be seen. Luckily the Moon Nightclub is included in the VCard VIP Club Pass so You can check out the club and leave if it doesn’t fit Your style. You will need to take a taxi to the Palms if You staying at the strip but that will put You at the front door where You can be seen anyway. Moon is a small club to Vegas standards at 499 Persons Capacity and will turn People away according to law.