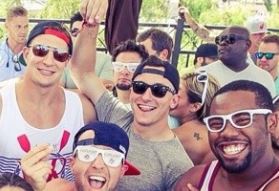 It didn’t take long for Johnny Manziel to make His way to Vegas after being drafted in the NFL. Seems like the media wanted to punish Him for doing so, but there have been plenty of NFL players in Vegas since the draft. Just like there is more than one gay player, there is more than just one partying player that likes Vegas. Johnny football attended a UFC fight as guest of Dana White, went to some pool parties and late night clubs. He did all the things that a young Man would do in Vegas given that opportunity. But He didn’t get in any trouble or disrespect the City of Las Vegas, so thanks for coming, Johnny, see You back soon!