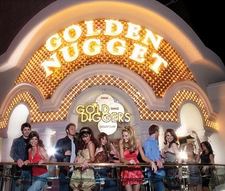 129 E Fremont
Las Vegas, NV 89101
Golden Nugget Hotel Casino Downtown Las Vegas is the most well known in downtown if not all over Vegas. Other than Caesar’s Palace, no other Hotel property gets as much time in media as the Golden Nugget. Staying here is an absolute pleasure. The star rating is 4 but it feels like a 5. The shark pool is lots of fun and the casino is second to none but the rooms really steal the show. I stay here often and have never had a complaint other than I don’t always get the room view that I want. It is the only truly luxury hotel in Downtown Las Vegas but it is in the moderate category because of the lower price.