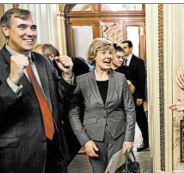 The ENDA, employment non discrimination act has passed the senate and is headed for the House for approval. If it gets approved there, it will become law and be a big benefit to thousands of Gays that work in Las Vegas. Las Vegas is said to have the highest percentage of gay workers in America. But isn’t it ironic that it cannot be proven because it is not legal to keep such records. Something Gay workers in Vegas would be proud to be able to say, they cannot because at this point it is just a guess. The Act got much of its wings from Las Vegas, since much of the complaints were said to come from gay workers in Las Vegas being differently or being passed over for promotions or even fired for their sexual preferences.