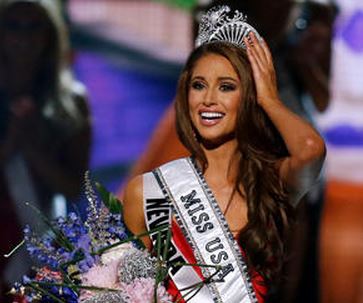 Las Vegas resident, Nia Sanchez is the 2014 Miss USA!
Nia Sanchez was crowned Miss USA Sunday night in Baton Rouge, LA. Nia is a fourth-degree black belt in taekwondo as well as being smoking hot. Her martial arts is what won the crown of Miss USA but not for fighting but for the story behind it. Sanchez was asked what She thought about the problem of rape on college campuses and She was able to tie in the answer with Her own personal story, the judges loved it and She was crowned the winner.

Sanchez answered the question about rape by telling of Her rough upbringing and Her desire to not be a victim by learning how to defend Herself. She also made it clear that if the judges didn’t vote for Her She would kick the living shit out of them. She didn’t say that but usually People do not tell about their martial arts training for any other reason.