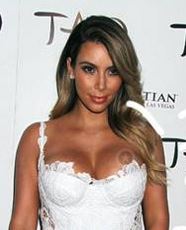 Kim Kardashian was at TAO over the weekend October 20, 2013 to celebrate Her engagement to Kayne West. The Rapper bought Kim a 15 carrot Diamond ring and rented out Candlestick Park in San Francisco to pop the question. The whole clan was on hand in San Francisco except, Lamar, Scott and Bruce. No word of they were not invited or didn’t approve of the engagement.
The couple celebrated at TAO in Las Vegas.
The couple announced they would not get a pre-nup but that was when the Jenner-Kardashian clan assumed that Kayne had more money than did Kim, now it comes to light that She has more than He. Seems he blows His money, whereas She has all Her expenses paid from the Show and saves most of Her money.