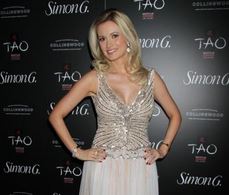 Holly Madison set to join Las Vegas Million Dollar Quartet in December 2013, according to the Show that plays at Harrah’s Hotel Casino, center strip.
It is no secret that Holly Madison was the reason for the success of PEEP Show. No offense to those that took Her place after She left or on a temporary basis during Her tenure. The show was Holly Madison as much as it was PEEP Show, plenty of People called the show, “That Holly Madison Show”. Will She do the same with the Million Dollar Quartet? Time will tell, but it probably will be a much smaller part than She had in PEEP Show. Madison left PEEP Show in October, 2012 to Have Her baby. She is now back in shape and ready for whatever costumes they prepare for Her. She is one of the true beauty’s to ever perform all over Vegas. The role I would like to see Her in is a Marilyn Monroe musical, which I would think would be a huge hit in Vegas or New York.