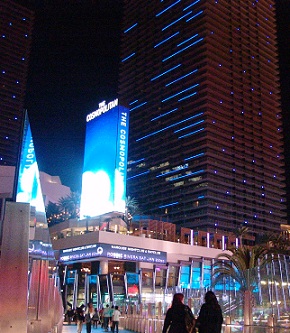 Losses of 25 million in the first quater of 2013 for The Cosmopolitan is hard to believe.
In a time where Las Vegas Hotels are making more and more money on things other than gambling, The Cosmopolitan found out that gambling might need to take more attention. Last quarter, Shows, Rooms and dining were down All Over Vegas and without the gambling to fall back on losses were common on the Las Vegas Strip. If You were just walking around All Over Vegas, You would look at the Cosmopolitan and think, Wow, They are killing it! it is hard to say that the Cosmopolitan is not the most happening spot all over Vegas, right? You could argue for a handful of others but Everyone would agree that the Cosmopolitan is a top 5 Property. So, how in the hell is it losing money? It’s all about the shift away from gambling, according to experts all over Vegas. Just a few years back bringing in whales and even medium size gamblers was the most important thing to a Vegas Property but not anymore. Now, these properties want to sell to the upper masses, the mass of People that can afford high priced shows, dinners and rooms. If They do not come, the Property losses money because They have no gambling to fall back on.